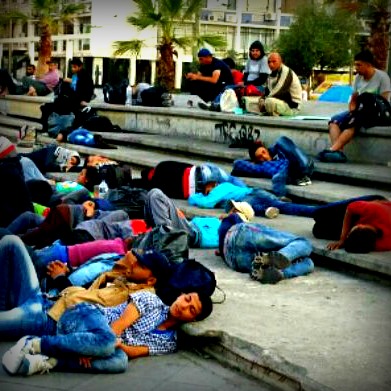 Its been a while since I’ve blogged anything around the counter trafficking work, not because I haven’t had anything to say, but because of a conspiracy of silence between me and the lovely guy who does my web work. In brief, I’ve been too skint to pay, and he has been too gracious to ask. Turns out I needn’t of worried as his help had been an act of Love all the time.

Well, I’ve still been head down ass up focused on the trafficking work, mostly in Greece these days as I’ve really needed to nail down one of the projects I was running for Love146 (who have stepped back from the youth prevention education in Europe to focus on care, requiring me to re establish www.crossborderinitiatives.org). As a friend once said, ‘you need to aim at something if you want to hit something’. So it’s been Greece Greece Greece for a while now.

It’s very difficult to say your focusing your energy on working in Greece with an eventual move there (this year) and not feel a twinge of awkwardness. For some reason I am pre wired to feel you cant say your working on Justice and Mercy work in a country which is for many a very beautiful holiday destination.
It’s like fundraising or trying to draw attention to a horrible issue in the Bahamas but perhaps recent global reporting on Greek problems means I have no need to worry.
The thing is, even with the last 5 years of suffocating austerity since the financial crisis you could still visit all the main tourist traps and be oblivious to a proud nations crumbling underbelly.

I wanted to share my stay in Greece from a week ago while it is still fresh in my mind, because in the 8 weeks since I was there previous, even I could see that things were much much worse.

Vic (my wife Victoria) and I were there to meet state and private organisations that work with children, migrants and human trafficking. Vic was getting a feel for how she might engage usefully when we move this year with her experience as a senior occupational therapist working with social services in England.
In addition to this we endeavoured to bring a video snapshot of our unique perspective of the dark side of Greek life to our friends in the UK.

I have been visiting the brothel streets and ‘white light’ districts of Athens for some years now, since 2009 when I first came to Greece in the middle of a 5,000 mile research road trip. At this time we were visiting projects, safe homes and street work to expand our understanding on Human Trafficking issues. I remember being shown around by a lady working to educate school aged children about the sex industry who asked that we “please wear sensible shoes or at least, no flip flops ! ? “
She didn’t explain but I realised pretty soon that the rough low rent neighbourhoods, which are home to hundreds of brothels, were also home to addicts and dealers with discarded needles everywhere.

I need to digress a little here away from trafficking because each little thing triggers a myriad of nasty stories in my mind, like this one and perhaps my writing here is meant to be not just informative for you, but cathartic for me.

My first experience of addiction and HIV was the ‘no open shoes’ visit I’ve mentioned. My second was stepping over semi conscious addicts on main street as I walked just yards from major tourist traps and then it was a visit with my 16 year old son and a co worker Daisy. The counter trafficking group we were visiting who work to support the girls in forced prostitution exclaimed that, “you must be pretty hard core and serious about the work!” What? “Well you have picked a hotel next door to the bar where the pimps drink while the girls are working, and just across the road from our drop in centre”.
Thank you easy Jet for your hotel recommendation, ill be sure to leave positive comments on trip advisor for you, like how interesting it was to arrive with a guy pissing up the hotel wall, and walk past the guy who had dropped his trousers to inject a freshly loaded needle of heroin in a vein in his crotch.

I visited a clinic once, which gave clean needles, counselled addicts and gave free HIV screening only to be told that the Government policy for giving a bundle of cash to people who had tested positive to get an apartment, had backfired. Some desperate people were now deliberately contracting HIV to get the cash for their drugs.
Mostly the addicts are destitute Greeks but there are migrants too who have hit rock bottom. I have learned too that Heroin’s ability to briefly take you away from all the crap in your life is no respecter of age. The dealers are pretty obvious; they have a bum bag at the front to deal their pre-loaded needles from. They seem a helpful bunch, never too busy that they wouldn’t find a vein and inject for you if your totally shit faced or In this instance your too old and disabled. Ill never forget the image of a sun soaked side street with a dealer injecting into the groin of a wheel chair bound man who must have been in his seventies.

On this occasion I didn’t see many addicts as I normally would clustered into one street, I figured the annual purge had occurred, where the police move addicts and dealers on to another location to give this neighbourhood a break and the next a nightmare.

Its just part of life, that you cant just be somewhere and only be aware of the part that you have chosen to work on. Just this week I saw elderly men asleep on pavements so narrow that two people cannot pass, they were asleep with a begging cup in their hands and literally every single person had to step over them, one old man, with a history and story of what led them to this, after the other.

There is the massive toy shop in the centre of Monisteraki, a window 30 feet by a hundred feet full of every bright playful colour imaginable, and outside this were make shift homes with people sleeping on blankets, people, like the men sleeping on the pavements, who were not there two months before. I say they were make shift homes because these were not the long term homeless of London or New York with a blanket and a dog, these were people who had just landed in desperation, with boxes and boxes of their life possessions next to them.

What’s crazy to me is there is all this going on for the Greek people and the horrors inflicted on the estimated 20,000 women and children in forced prostitution… and then the refugee crisis land on your doorstep, literally.
Oh my word, the insanity now of EU leaders, stopping refugees moving out of Greece yet doing nothing to stop the 2,000 plus refugees arriving every single day.

Vic and I had a less than cheery little day filming for our newsletter. We had walked the many brothel streets and addict hang out and were trying to make our way to Victoria Metro Station on foot, as this has become a central public bed space for the refugees. It’s an attractive square with restaurants all around and people eating from a table full of plates chatting and ruminating, just ten feet from refugee families eating food hand outs from foil trays, almost as culturally disposable as its recipients.
The square was full of people in limbo with no easy solutions in site.
The startling, mind-boggling thing is that a few squares away, I was as likely to find a public feeding programme with a queue of Greek people of all ages desperate from growing poverty. It gives me an unavoidable sense that when I return in a few weeks time that the scale of issues In Greece will be tangibly worse.

It is actually possible to walk in many places in Athens and see that life is normal, or at least come away feeling that Greece and its resilient people are doing ok and that it is all going to work out. Holding this view would be foolish I think. Whilst many are still finding ways to keep their heads up and whilst so many young people and couples are ‘getting by’ being subsidised by their parents who have probably had their pensions slashed in half, there are those who wont make it.
I’m not saying any of this to make you depressed but neither can I say this to give you any false sense of optimism that things wont get worse before they get better. For some individuals I don’t think things could possibly get any worse at all.

Finally just one more picture of the clashing cultural and economic world that is Greek society today, witnessed as Vic and I took our daily walkabout.
On our way to one square I saw a man probably in his mid sixties, he didn’t look homeless but as I saw him lean/fall forward to support himself with his head on a car roof I could see he had been drinking. This was outside a packed restaurant with people eating happily oblivious at street side tables.
I felt for them and I assumed the man was about to urinate in the street (as we had seen an elderly woman do the day before) but why he was supporting himself with his head was that he needed to have both hands free to lift his shirt, removed his colostomy bag and drain its contents into the street. If you don’t know, a colostomy is a surgical procedure, which bypasses the bowel and requires you to have a bag attached to the outside of your body.

For me, sadly I was just another voyeur passing by the complexity of what this man had been through and would continue to go through. But at least I am a passer buy who is trying to address one of the issues which has run riot in Greece over the last decade, that of human trafficking in a destination and transit country for people treated as meat. As I suggested earlier, you have to aim at something.

There is a problem of scale in Greece; this is obvious at every level.
There is a crisis of the scale of hungry destitute people and those who have allowed their lives to be sufficiently disrupted to provide food and address housing needs.
There is a crisis of scale for the disorientated groups of refugees sitting on street corners or camping out in squares and those helping them feel human and perhaps caring enough to let them know their story and futures matter. That whether they stay or move on – their humanity matters.
There is a crisis of scale between the long established sex industry and its demand in Greece (now largely full of trafficked girls) and those who seek to bring emancipation and make this psychological and physical abuse less acceptable.
In reality, Greece has a huge trafficking problem and in my experience, the least amount of people seeking to address it compared to the rest of Europe

One thing the Greek people know better than the rest of us is that you cannot wait, nor rely on Government to solve your personal problems nor that of your society. This crisis of scale can only be addressed by people like you, sufficiently disrupted by what you see around you to aim at something… and hopefully hit it.